Exports In The Basin 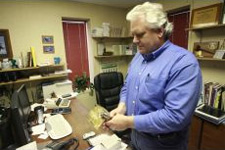 In recent years, exports from Odessa have exploded. And, by participating on a committee, some local business people have helped the area keep up with the trends.

The West Texas District Export Council is one of 58 such bodies nationwide, and one of four in Texas. It has 24 members serving an area that goes from the Panhandle to the Mexican border, including Odessa, Midland, Lubbock and Amarillo.

The council has had to deal with the rapid increase in exports from the Permian Basin since the price of oil went up. The councils were set up by the U.S. Department of Commerce 30 years ago to allow leaders in the export business a chance to network and communicate with government regulators.

“That’s a significant amount of revenue coming into Odessa that wasn’t even in the country before,” said Mark Merritt, owner of Westech Seal Inc. “As many times as money turns over in a community once it comes in, that’s a lot of money.”

Merritt joined the council a year ago. He’s been exporting since 1998.

In 2006, the last year in which numbers are available, Odessa businesses brought in $171.469 million from exports. That was an increase from $57.227 million the year before.

Dan Swart, director of the commerce department’s North Texas Export Assistance Center, said that number should increase when 2007 and 2008 figures are released. But with the drop in oil prices, he can’t yet speak for 2009.

“If you or I knew that, we wouldn’t be working for a living,” he said.

Swart has been running the West Texas assistance center, as well, until new director Harry Henson takes over. He said exporting actually tends to increase when the economy falls off. But with exports in West Texas often related to oil, that’s not a certainty here.

“Overseas, they’ve got the same challenges we do domestically,” he said.

But the challenges with exporting can differ depending on what country you’re dealing with, Swart said. With many local businesses trading with Middle Eastern countries and Russia, it’s important to work with the commerce department in conducting background checks.

“The companies really needs to check out their buyers and make sure they’re selling to good people, not bad guys,” he said.

Merritt said working with the export council is also valuable in networking, as well as forming relationships that can be useful in the future. He has no hangs ups about sharing information with companies that could be considered competition if it helps the community overall.

“Everyone that goes into exporting has some bad experiences,” he said. “If others can benefit from looking at your learning curve, they’re a lot better off.”

Working together, the export councils and the assistance center can help businesses deal with rules and regulations, said Sally Holloway, who serves on the export council as economic development specialist with the Odessa Chamber of Commerce.

>> Use the Export Assistance Center to get help.

>> Include extra copies of paperwork in packages.

>> Place stamps and gold seals on documents, especially when sending them to Middle Eastern countries. They are the equivalents of signatures in some parts of the world.

Sign up our newsletter to get update news and article about company.

Copyright © 2021 . All rights reserved. Developed by Keystone IT Solutions.